Champagne Bollinger present a very special 007 60th Anniversary Jeroboam Set in a 25-piece numbered edition, presented in a limited edition Dr. No dot Globe-Trotter case. Just 25 Jeroboams have been released – one to mark each of the 25 Bond films that span its 60-year history.

Event Merchandising gets its Premises License in order to distribute Alcohol.

Backstory. Designed by Maurice Binder, the Dr. No title sequence is a modernist vision: his titles create the visual elements that became icons of popular culture. The coloured dots change colour, position and form patterns at the same high tempo as the score and are just one element of a hugely influential sequence.

Details. A collector’s edition – just 25 pieces have been issued globally, each numbered 001 to 025. The Millésimé 2007 champagne is housed in a jeroboam bottle etched with the iconic Dr. No dots.

This prestige Cuvée is issued from a single year which is considered as exceptional and the 2007 vintage has a bold and vibrant character. The wine has been vinified in wooden barrels, before being aged in the Champagne Bollinger cellars for 14 years. The resulting is an appealing contrast between intense, spicy aromas and notes of fruit, brioche and honey.

The bottle is presented in a bespoke Globe-Trotter 26” 2-wheel trolley case, handmade by the British luggage makers’ in their signature patented vulcanised fibreboard and leather. Lined in a bright red, the case has a special edition Bollinger and 007 plaque inside and out. The jeroboam is secured in the case with a precise cut-out to protect the bottle in transit.

The makers. Bollinger has been creating prestigious champagnes since 1829. These outstanding wines are the result of rigorous attention to detail, for Bollinger accepts nothing less than excellence. Each and every detail represents a quest for a certain form of perfection. The House has held a Royal Warrant since 1884.

The bespoke 007 boutique pop-up at Christies.

The renowned British auction house, which first opened in 1766, housed an elegant 007 Store experience designed and created by Event Merchandising and EON.

The evening’s event, “Sixty Years of James Bond” honoured 007’s 60th anniversary on the silver screen was co-hosted by Christie’s and EON Productions. The 007 Store and Event Merchandising offices met for a glamorous evening to celebrate a significant moment in cinema’s history as well as raising money for a range of worthy causes.

All 25 lots presented were sold during the evening, raising an incredible total of £6,103,500.

Part I Live Auction’s top lot was the No Time To Die Aston Martin replica DB5 stunt car, which sold for an impressive £2,922,000. 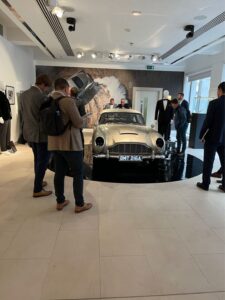 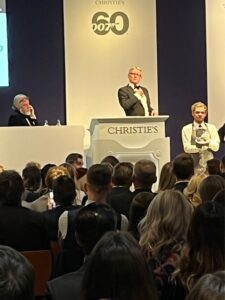 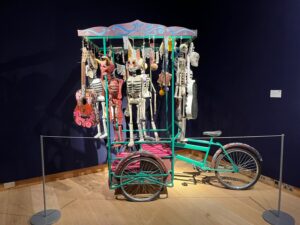 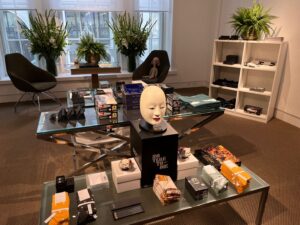 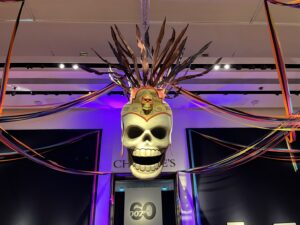 Celebrations all round at Event Merchandising! 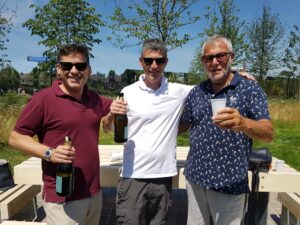 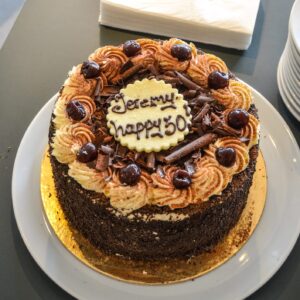 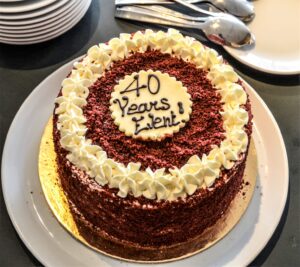 It’s been an incredible four decades and Event is proud to have hosted some incredible moments in history. From the music events to expanding and branching out into the world of global omnichannel retail success, current clients include UEFA and James Bond 007.

Amidst the business (and busy-ness) of client meetings, summer festivals and other live events, the office managed to get out into the sunshine for a couple of hours. All enjoyed pizza, Champagne and tiramisu at a nearby London pizzeria.

The whole team enjoyed the scorching 26-degree weather, including our “Bond Girl” Dannielle from the 007 office! 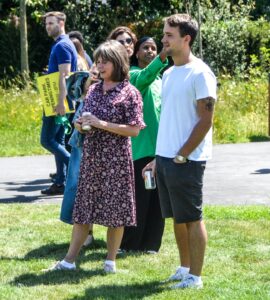 After many slices of wood-fired pizza, speeches were made by Paul, Jeremy and founder, Martin Goldsmith. Jeremy retold how he left his 13th birthday party and Bar Mitzvah to attend the iconic Live Aid as made possible by none other than Event Merchandising back in 1985.

Having reminisced, pored over a photo album of Jeremy (pre-EML career) and caught some rays outside with dessert, everyone headed back to work (and another slice of cake) feeling refreshed, relaxed and ready to drive Event into an exciting new era!

Jeremy Goldsmith and Event Merchandising – a very happy birthday to you both. 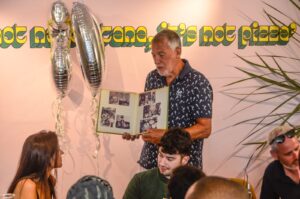 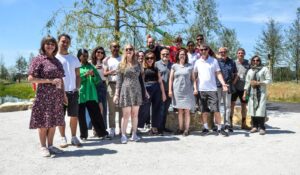 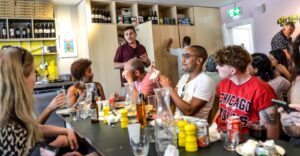 At Event Merchandising we’re excited to celebrate the summer and the many festivals that come with it! First up, we have HOG Rally Portoraz (9th-12th June) showcasing the newest and shiniest Harley Davidson models.

Carfest celebrates its 10th anniversary this year at its North and South ventures in July and August respectively. Named the UK’s largest family fundraising festival in the UK, this is so much more than a 7-day festival for petrol geeks!

Carfest North in Bolesworth, Chester from 18th-25th July and Carfest South at Laverstoke Park Farm in Basingstoke (23-29 August) both look forward to performances from Rag ‘n’ Bone Man, Paloma Faith, the Bob Marley Revival and many more besides.

Sail GP goes international in Plymouth, Denmark, France and Spain, and Noughty Nineties lands in from Brighton 25th – 29th August for a taste of nostalgic vintage pop and garage. 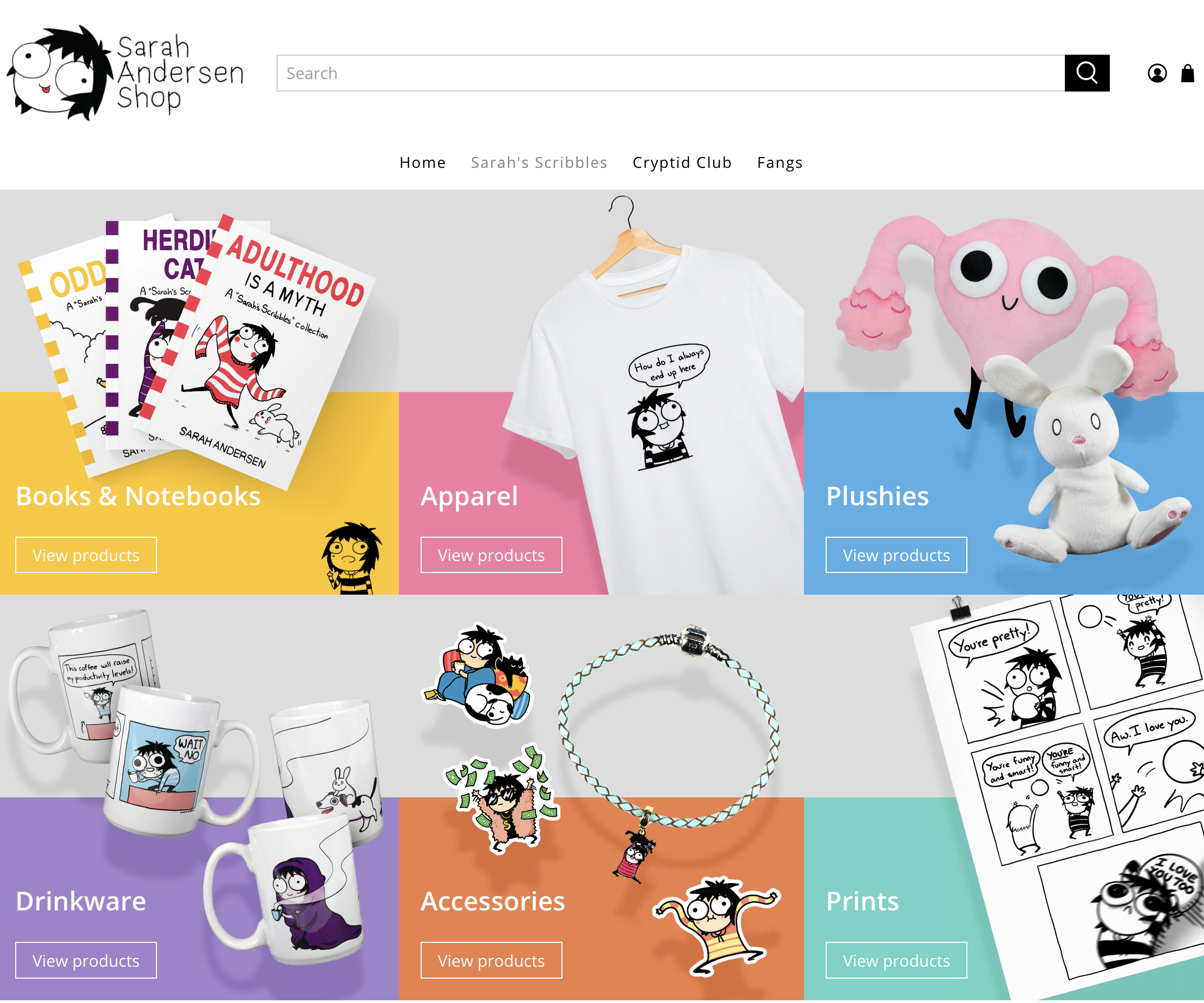 Sarah is a cartoonist and illustrator. Sarah is a fan of coffee, cats, and covens. Her comics are semi-autobiographical and follow the adventures of her friends, and her beloved pets.

The author of Sarah’s Scribbles, Cryptid Club and Fangs.

The store features clothing, collectibles, souvenirs, signed memorabilia. There are collections for the Champions League, Europa League and Conference leagues. 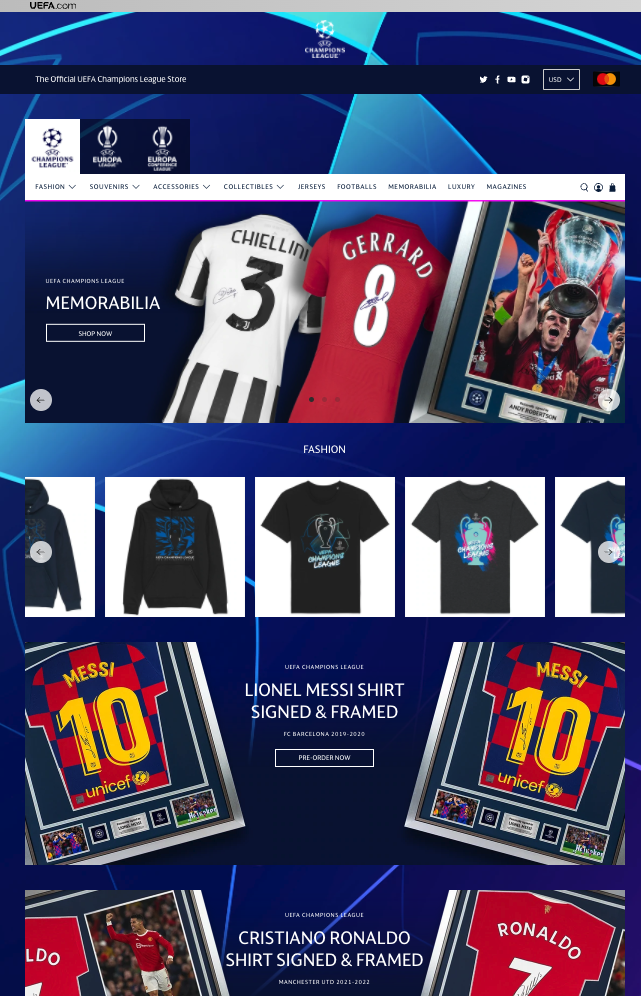 A super creative execution, thank you Joe and the Event team.

Recorded at the legendary Black Heart in 2019, “You May Struggle To Hear Me Above The Crunch Of My Enemies Skulls” is a vinyl exclusive stand-up comedy show from the mind and mouth of Ed Gamble. Totally improvised across two sweaty nights in Camden, it captures live comedy in its purest form. Mainly, though, it’s being released so Ed can pretend he is in a heavy metal band. Ed’s body on the cover art is not accurate at time of writing. 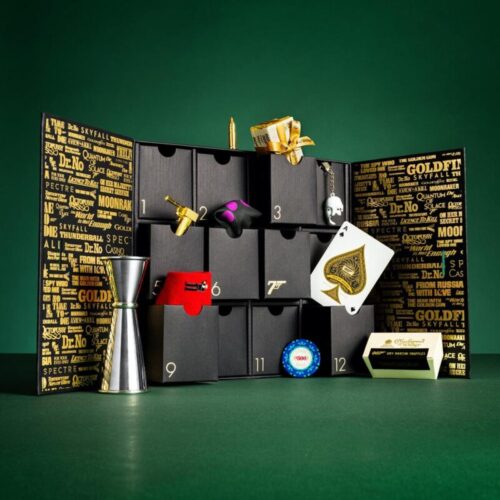 For the first time, 007 introduces 12 Days of James Bond- the first 007 Advent Calendar. This is the ultimate gift for all Bond fans, the luxury and limited edition item has 12 drawers of Bond inspired gifts in anticipation for Christmas.

Drawer 7 contains a money-can’t-buy Casino Royale prop and the others are filled with gifts that vary from exclusives to collectibles and collaborations. All gifts take inspiration from the iconic 25 year franchise, ranging from Dr. No (1962) to No Time To Die (2021). Priced at £199, available at the 007Store.com from September 15th 2021.

A sophisticated box with 12 drawers, sleek magnetic doors with a ribbon tie closure. The luxury design opens to doors that are lined with gold foil wallpaper of the Bond films title graphics.

A flavour of the contents…

An iconic piece of Bond film history. This exclusive item is a real prop cash chip from the poker table in Casino Royale (2006).The collectible also comes with a certificate of authenticity from the Bond Archive. The special item is taken from the intense games of Texas hold’em where Bond is victorious in defeating villain Le Chiffre.

An exclusive key piece taken from 1974’s The Man With The Golden Gun. It is a replica of the infamous bullet that initiated the search for Scaramanga after it had caught Bond’s eye at MI6. It is an exact copy, plated in 24ct gold and inscribed with 007, making it a precious collectible from the Bond archives.

Another exclusive, inspired by the famed Octopussy (1983) backgammon scene and Kamal Khan’s use of trick dice in order to defeat the Major and 007 in turn. They come in a drawstring bag and are guaranteed to land on a double 6 every time they are rolled.

The exclusive 100% silk square comes in a sleek black, with hand-rolled and stitched seams. The colourful dot design, worn by Maurice Binder, is taken from the iconic opening titles from the film that began the beloved franchise- Dr. No (1962).

Exclusive. The first of its kind, the 007 Advent Calendar needed chocolate. In partnership with Royal Warrant holders Charbonnel et Walker, five stacked, ribboned chocolate bars, made of British milk chocolate were made. They are wrapped in artwork from the Bond Archive, taken from production on You Only Live Twice (1967).

In celebration of. Inspired by. As seen is. The 007Store.com is the official online store featuring products inspired by the James Bond franchise. The store combines legacy pieces with a modern crop of designer collaborations. Highlights include collabs with Bella Freud, N.Peal, Globe-Trotter, Charbonnel et Walker, Orlebar Brown, The Royal Mint and Swatch, alongside made-to-order exclusives.

London, UK/Nottingham, UK. Event Merchandising Limited (EML) and Asmodee Entertainment have entered a licensing partnership to bring one-stop-shops for all things merchandise for Arkham Horror, Legend of the Five Rings, and Twilight Imperium to fans in locations around the worldwide. This partnership is an example of Asmodee Entertainment’s push to expand the merchandise offerings available to fans of some of their biggest hobby game brands.

“These are exciting times for us and for fans of these brands. For over two decades these three rich and fascinating universes have gathered fans who cherish diving into adventures in these worlds – they are a true passion for many and part of their identity. It’s about time that we enabled them to express their fandom beyond the games. Novels from Aconyte made a start of this expansion, merchandise now follows. And we couldn’t have found a better partner for this than EML!” says Alexander Thieme, Licensing Manager for Consumer Goods and Publishing at Asmodee Entertainment.

Initially opening in the UK in Q4 2021 these online stores will feature specially designed apparel, accessories and homewares such as pillows and mugs. The first of these exciting launches is planned for Q4 2021 and products will be available online. Fans can expect more exciting products to be added to the stores regularly after launch.

Jeremy Goldsmith of Event Merchandising said “Asmodee have created amazing, captivating content and artwork and we are delighted to be designing and operating the online store for Arkham Horror, Legend of the Five Rings, and Twilight Imperium along with a selection of key product lines.”

More details will be announced soon.

Event Merchandising, with headquarters in London is a worldwide merchandise company. Event Merchandising services range from designing and manufacturing creative products to retailing at live events, devising pop-up superstores and running online shops globally. Established for over 35 years, Event Merchandising works in partnership with some of the world’s most recognized gaming, influencers, film, sports, music and entertainment brands.

Asmodee Entertainment is a platform of games publisher and distributor Asmodee. Its mission is to extend Asmodee’s intellectual properties into TV/film, novels and comics, location-based entertainment,

Asmodee Group is a leading international games publisher and distributor committed to telling amazing stories through great games with tens of millions of games sold in more than 50 countries. Through our portfolio of iconic game titles, including Catan, Ticket to Ride, Pandemic, Dobble/Spot it!, Arkham Horror, Splendor, KeyForge, and Star Wars: X-Wing, we create a dynamic transmedia experience for players across       a variety of digital and physical platforms. Asmodee also creates inspiring and innovative products in partnership with leading entertainment and technology companies. Asmodee operates in Europe, North America, South America and Asia and is headquartered in Guyancourt, France. Learn more at corporate.asmodee.com.

If there’s something weird
And it don’t look good
Who you gonna call?
Event Merchandising!

I ain’t ‘fraid of no ghost 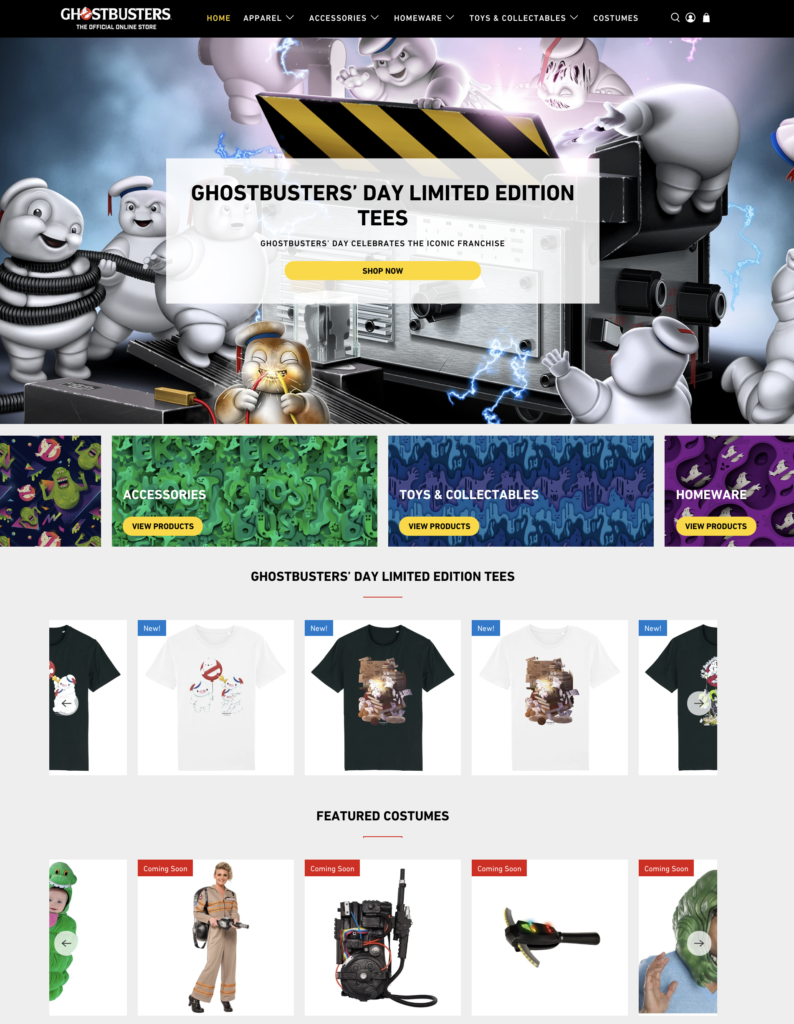